Posted on November 9, 2015 by bobjanisdillon 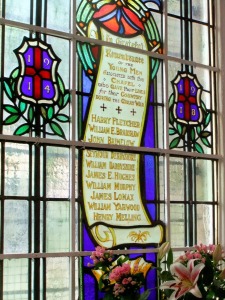 They were not just soldiers. They were bricklayers and collier workers and parcel clerks. They were Sunday School teachers and part of the congregation at this chapel, who sat in these pews. They were sons and brothers and new husbands. They were dear mates at the pub. They liked a good laugh.

Before, not long before, they were children, boys on the way to becoming men. They played in the fields around here, on the hills and in the woods, in Bryn and Billinge and Ashton. They may have played at being soldiers, but they were not soldiers. Not at first. Not until the call came. And then came the call. The nation asked them into service.

These men knew what the call might mean. They knew it was dangerous. Their nation’s call to service could end all their goals and ambitions, in a single stroke. As indeed it did, for those who died. Not a one of them retired from a career. Not a one of them ever held their grandson or granddaughter in their arms. Not a one of them died of old age.

“They shall grow not old, as we that are left grow old:
Age shall not weary them, nor the years condemn.
At the going down of the sun and in the morning
We will remember them.

They mingle not with their laughing comrades again;
They sit no more at familiar tables of home;
They have no lot in our labour of the day-time;
They sleep beyond England’s foam.”

War is noble. I believe this is true. War is utterly and completely horrible. I believe this is true, too. The two sides are not irreconcilable. For when you consider the young men who went off to risk life and limb to protect us, how can you not think of the nobility of these men? And the women at home, who sacrificed so much, and the old men and the children who pitched in too, everyone working together in a common cause, is there not a grand nobility there? And when we think of what was lost – what was lost forever – what will not be, what will never be – is not war uniquely horrible?

I haven’t served in the military. I never volunteered, and there hasn’t been a draft in my lifetime. My youngest brother did: he enlisted in America and served three tours in Iraq and Afghanistan. He faced great dangers, and he did so in hopes of making the world a better place. I’m proud of him. My father served in the military – he’s here today – my grandfather served, my brother-in-law, a couple dear friends. Several congregants I have known served in the military, including, I imagine, some of you. You answered your nation’s call. And all of you who were alive during the Second World War were affected by it, no doubt. The war changed everything, at home and abroad. The war meant rationing and bombing raids and listening to newscasts and worrying. I expect there was not a village in this entire country that was not profoundly affected in some way by the war.

For those of us, like me, who have not known war firsthand, it is important we remember. It is important we remember what war is. War is not a news report. Let us not mince words, when it comes to war. War is young men getting their fingers blown off by a grenade. War is the shock of feeling an explosion in the trench and then turning around to see your best friend, the one you played cards with yesterday, dead and in pieces. War is cholera and disease and miserable waiting for death. War is bombing of civilians, children learning to fear the sound of an aircraft, children crouched below tables. All too often in wars of our day, and in wars past ages, war is widespread rape against women. War is lives cut short, empty chairs at families’ Christmas celebrations, forever after. War is men and women and children being traumatized by violence, for years, decades, even generations after the conflict. War, by definition, is the intentional killing of other people. It is not pretty.

I’m sorry to be so graphic, but if we’re going to remember – and I think it’s important that we do – let us always remember what war is. War is not a news report. It’s easy to forget that, especially when wars are fought a long time ago, or a long way away, by someone else. But it is important to remember what war is. Being clear about what war really is does not diminish the heroism of those who served their country. On the contrary, it helps us to understand the magnitude of what was being asked of these young men – some of them nineteen, twenty, barely older than boys. Much was asked of them. They answered the call. Much was asked of their families and their communities. They gave.

We remember their heroism, today. And we try to build a world where that particular type of heroism – to thrust young boys into the horrors of war – is no longer necessary.

But war, the escalation of conflict into organised violence, is a conscious choice. It may be that sometimes the other choices are worse than war. In World War 2, for instance, it may well be that war, horrible though it is, was probably a better choice than letting the nazi party take over the world. But war, like slavery and human starvation and cannibalism, deos not need to always be a feature of human life. Like Polio, it can be eradicated, though the cure may be not as simple as a vaccine.

Actually, you may believe this from what you see on the news, but our world is actually more peaceful than it ever has been. A rough estimate is that about 400,000 people die directly from war violence each year. It is a terrible number, and far too high. But as a percentage of the global population, it is actually decreasing, and probably as low as any period in human history. This is including the violence in the Middle East, and East Africa. As a global people, we are less likely to die from war and violence than ever before. I like to think that the young men who died in 1914 to 1918 – men such as Harry Fletcher and William Darbyshire and James Lomax – would extract some solace from this. I do believe they played a role in a more peaceful world. It must not have seemed like it, in the midst of that senseless carnage that was the war that poets like Wilfred Owen warned us to never get sentimental about. It must not have seemed like peace was anywhere near, in the trenches. But from the sickening aftertaste of war came our resolve to build a better world. A resolve that was shaken by the second world war. As it has been shaken in numerous conflicts since. We can not eradicate evil from the world. Evil lives everywhere, even in our own heart. But we can increase the amount of good in the world, little by little. We can make peace.

I believe we do this by fostering connections with each other. I believe we do this by loving the stranger and loving our enemies. This is not easy work. But it is possible. War happens when there is an “us” and a “them”. Us vs. them: this is true of the conflict in Syria, in Jerusalem and Palestine, in Ireland, anywhere. War requires an us and a them.

And any time we trouble or challenge that firm dichotomy between us and them – we are, in effect, waging peace. The youth of today know this – you’ve told me how your kids and gradnkids live all over the world some of them, in other parts of Europe and even other continents. And even if they’re here, many folks online are livechatting with someone in Taiwan while exchanging recipes with someone in Argentina. They – and you – are reading books by Nigerians or news articles by Indian journalists. The world is becoming a more connected place. Does this guarantee world peace? No, of course not. But it makes it just a smidgen more difficult to divide the world into us and them. It increases, by a jot, the collective compassion of the human species. Every time we reach out and connect to someone who is a bit different from us: subtly, gradually, we make the next war a sliver less likely.

In the end, it’s all about realizing we’re all people, isn’t it? It’s all about treating people like they’re important. Henry Melling, Henry Potter, William Derbyshire, and the rest: you are important to us. You should have lived long and happy lives, and died in old age, but because of our warring ways, you did not. You answered the call to serve in a time of trouble. But I cannot think of you as dead. You live in our hearts. You live on in our resolve to live together in peace. For as Jesus said, “This is my commandment: that you love one another as I have loved you. There is no greater love, than to lay down one’s life for one’s friends.” You gave your life, for your friends, for those you loved, for your country, for the hope of a better world, for us. May we give the time of our lives, to ever broaden that sense of who is our family, and to make peace our true home.